The following was published in the Financial Times on July 14, 2020. Republished here with permission. 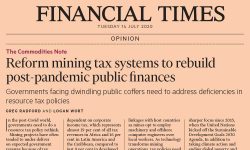 In the post-Covid world, governments need to do a resource tax policy rethink.

Mining projects have often tended to under deliver on expected government revenue because of tax policies that are little changed from colonial times, and a global tax system that penalises developing countries and features well-worn loopholes.

Now, with the pandemic putting intense pressure on public coffers, the time may be right for many nations to finally reform mining tax systems and policies.

Fighting tax avoidance is necessary to ensure host governments collect their fair share, but it is no easy task, even for well-resourced tax administrations. For instance, only after a multiyear court battle did BHP, the world’s biggest miner, agree to pay A$529m to settle a dispute with the Australian tax authorities, for a transfer pricing scheme that shifted profits from Australia to Singapore.

Paradoxically, these same countries are acutely dependent on corporate income tax, which represents almost 19 per cent of all tax revenues in Africa and 16 per cent in Latin America and the Caribbean, compared to just 9 per cent in developed nations, according to recent OECD statistics.

The IMF estimates tax base erosion and profit shifting (BEPS) denies the developing world of more than $200bn of revenue per year across all sectors. Recent OECD data from 93 jurisdictions confirm that multinationals continue to lower their tax payments by using low-tax investment hubs where they report a relatively high share of their profits (25 per cent) compared to their employees (4 per cent) and tangible assets (11 per cent).

With the mining sector, frustrated governments can end up politicising tax disputes and the conflicts play out in public. Recent clashes include Rio Tinto in Mongolia, Barrick Gold in Tanzania, and Glencore in Zambia. These disputes hurt host countries’ credibility with investors and contribute to public mistrust of the sector as a whole.

Policymakers need a wider range of options that can be tailored for specific scenarios. Some governments are already turning to measures such as state equity participation, and production sharing contracts like those typically found in the oil sector. Others may look to more flexible tools such as Chile’s progressive royalties, or effective rent taxes. Better administrative measures can guarantee unprocessed minerals, such as iron ore and bauxite, are exported at market prices.

Domestic resource endowments, international investment frameworks, governance standards, and access to capital will all factor into any new policy. Governments must play their part by operating with high levels of accountability and financial transparency. Ultimately, the right policy will provide fair returns to producing countries and build trust in the mining sector.

The need to strengthen public finances has come into sharper focus since 2015, when the United Nations kicked off the Sustainable Development Goals 2030 Agenda. In addition to taking climate action and ending global poverty and hunger, the 17 goals include improving domestic resource mobilisation via better government collection of tax and other revenue — because it is widely understood that delivering the SDGs on time will require considerable financial resources.

Longstanding tax policies have contributed to the precarity of public finances in the developing world. The current economic recession and speed of technological change have highlighted that these deficiencies need to be addressed. Clearly, mining tax policies are overdue for reform.

Greg Radford is the director of the Intergovernmental Forum on Mining, Minerals, Metals and Sustainable Development (IGF). Logan Wort is the executive secretary of the African Tax Administration Forum (ATAF).

The IGF and ATAF are collaborating on a new project, The Future of Resource Taxation.