How Will Women Fit Into the Mining Workforce of the Future?

How Will Women Fit Into the Mining Workforce of the Future?

Mining technology has constantly evolved over the centuries, but today’s emerging technologies are rapidly reshaping the nature of mining work as never before. Workers will surely feel the knock-on effects—but will those effects change the gender dynamics of the traditionally male-dominated mining workforce?

It’s tempting to be optimistic. One might assume that new ways of working might challenge ideas prioritizing the physical strength of workers and thereby push large-scale mining toward gender balance. However, examples from the past indicate that while such advances may gradually upskill the mining workforce, our research suggests they may also increase its masculinity if new developments are tailored to suit male workers.

As the increasingly digitized large-scale mining sector is set to ramp up to produce the copper, lithium, and other minerals critical to low-carbon energy transitions, the Women and the Mine of the Future (WMF) project has set out to shed light on the gendered employment landscape for large-scale mining via granular gendered data to help stakeholders assess, anticipate, and address inequities with evidence-based policies and programs.

Why Does Gender Equality in the Mining Workforce Matter?

Across the globe, large-scale mining offers relatively high wages to workers. It also represents one of the most male-dominated industries, with women making up only 5% to 15% of workers. And while mining may be a small sector in terms of total employment in a nation, it is often the biggest and most important employer for many mining communities. Balancing access to mining jobs can bring secure livelihoods to women and their households while engendering trust with authorities and industry.

Decision-makers need to understand the status quo for women in mining if there is any hope of addressing longstanding inequities during the next generation of large-scale mining—a generation that will be characterized by digitization, automation, machine learning, artificial intelligence, and more.

Accordingly, the first phase of our WMF research project is to establish a baseline gender profile for workers in large-scale mining. A clearer picture of the gender dynamics on the ground today can inform actions to ensure new mining technologies do not maintain or intensify existing inequities.

This year, we released uniquely granular and comparable data on the mining workforces in 10 diverse nations, drawn from household surveys collected by the International Labour Organization. 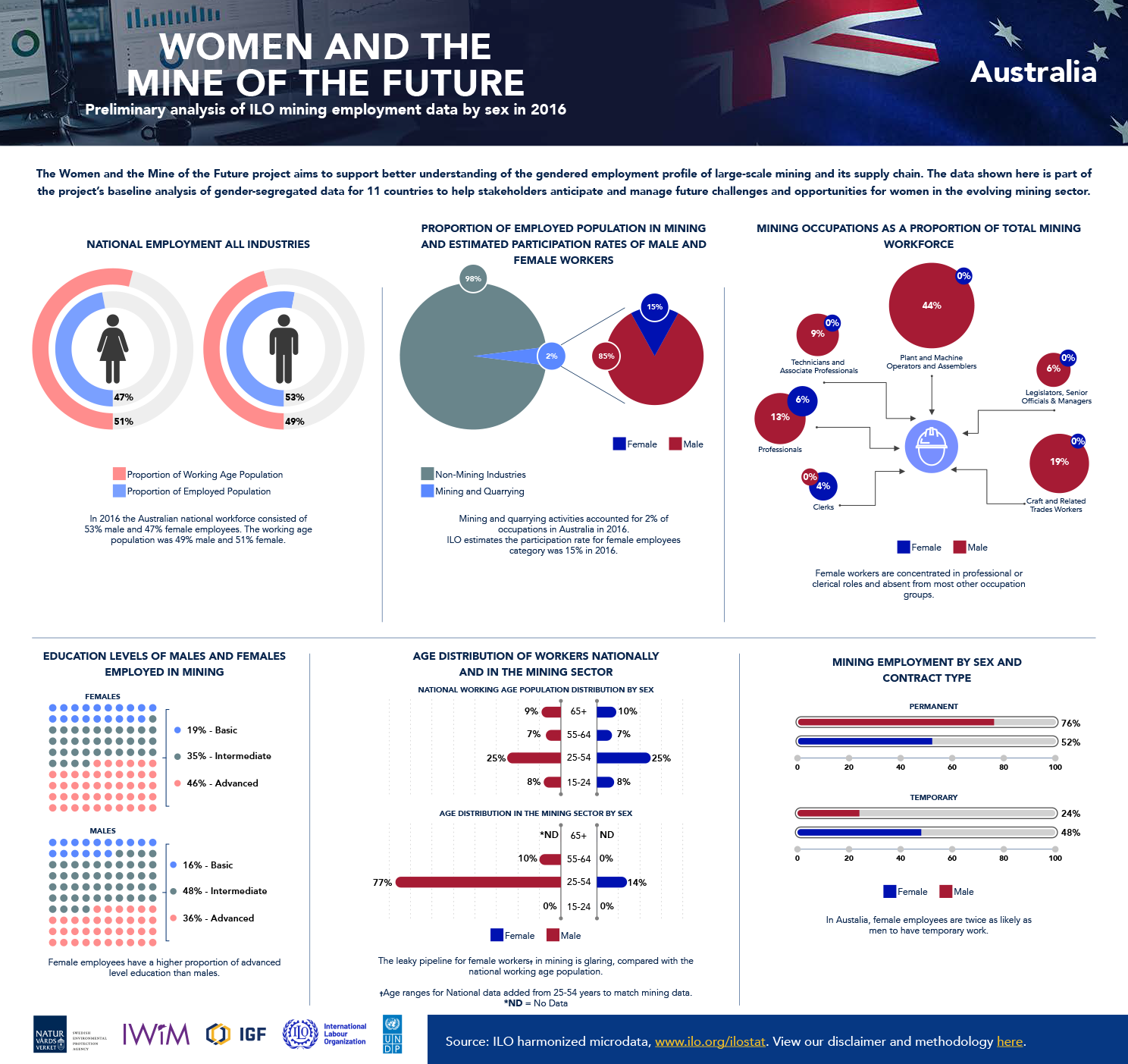 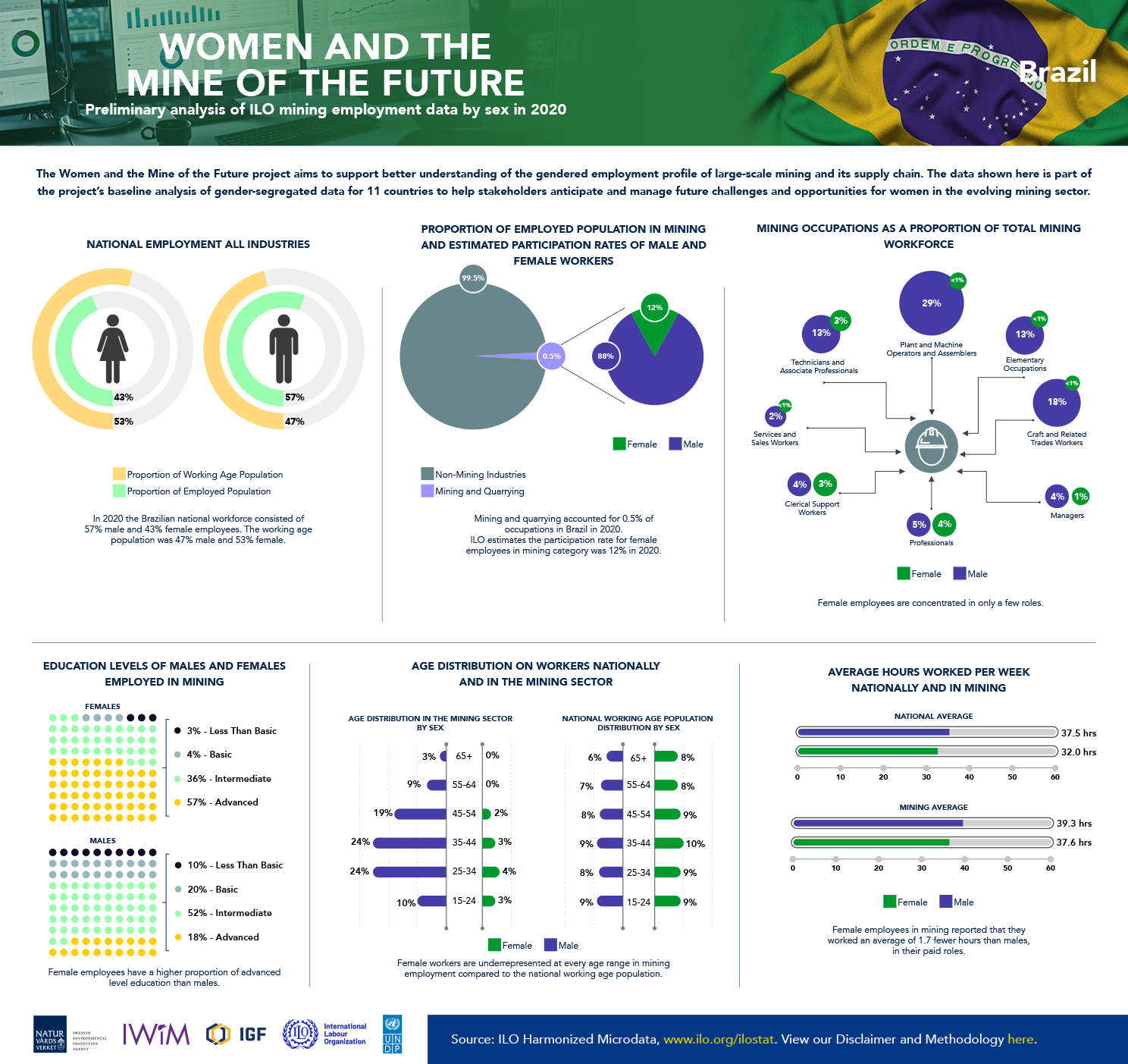 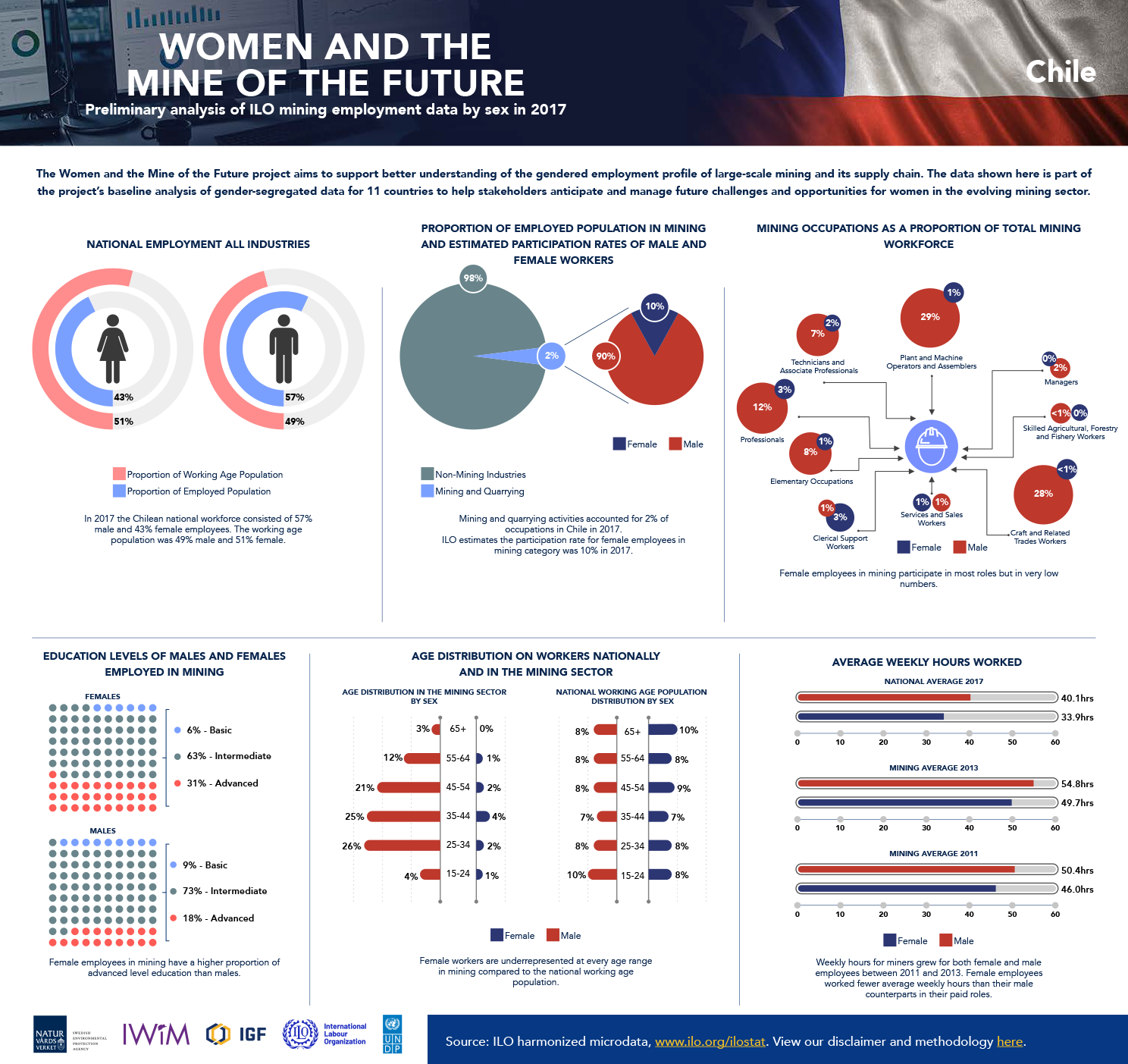 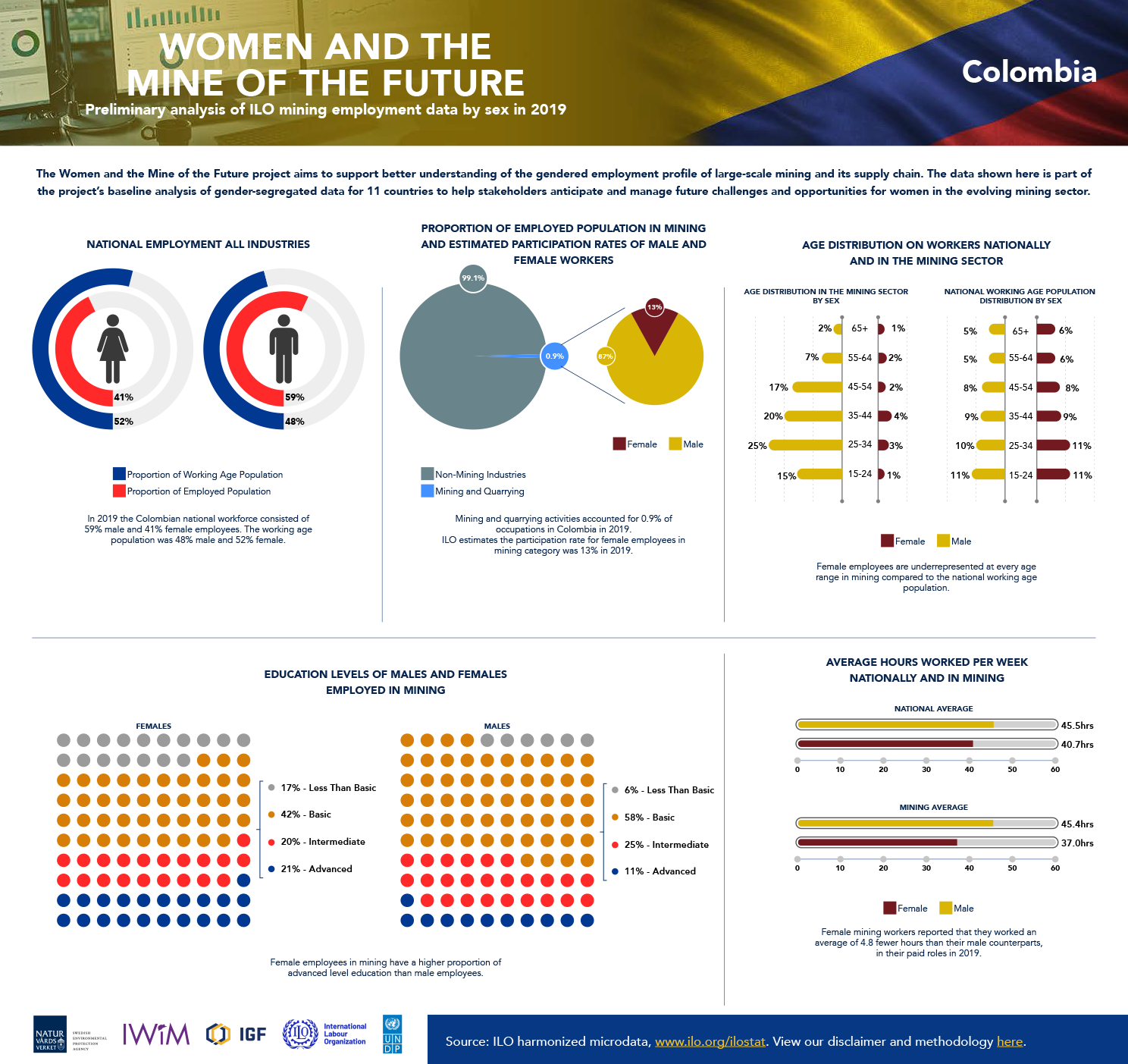 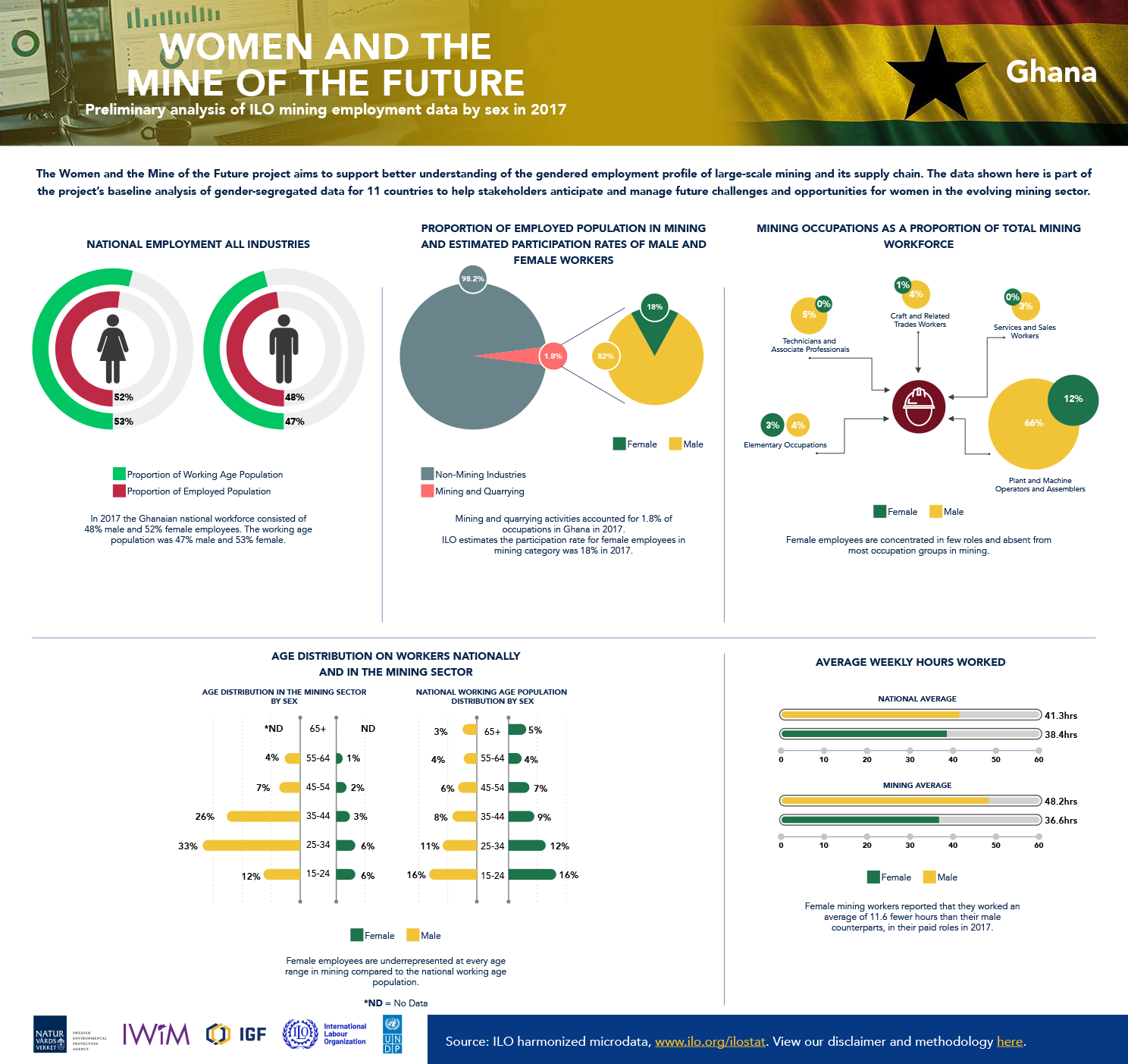 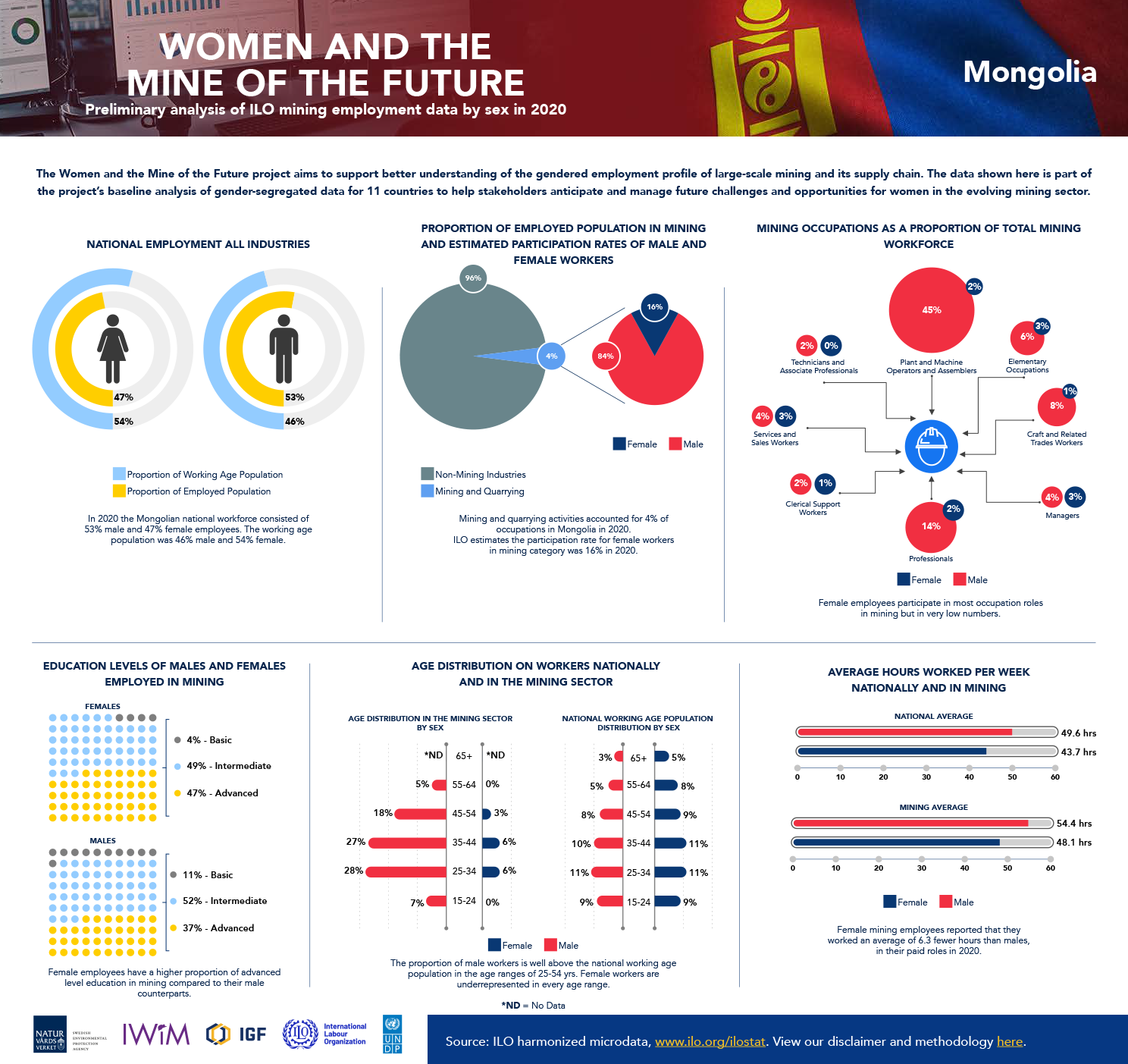 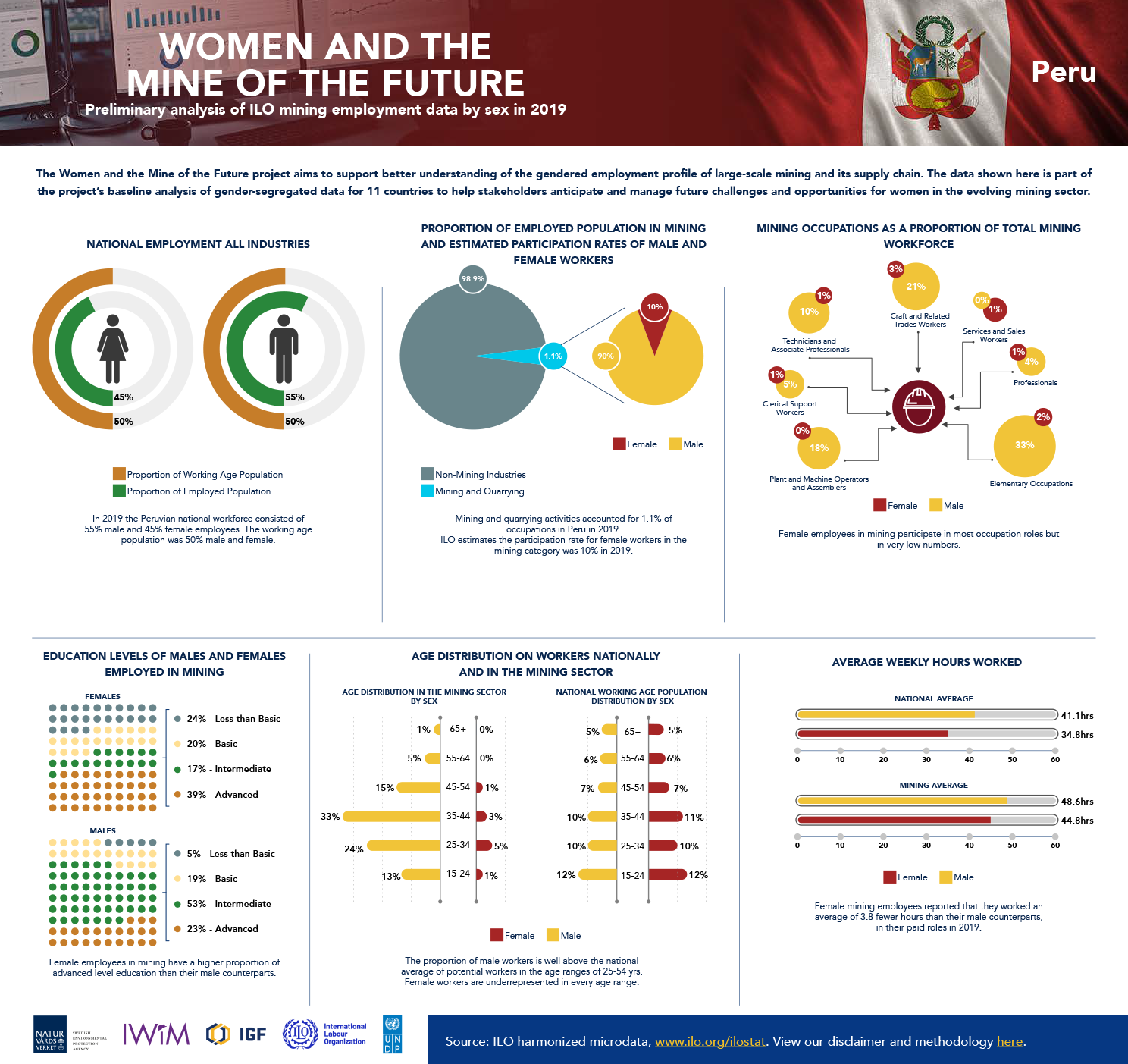 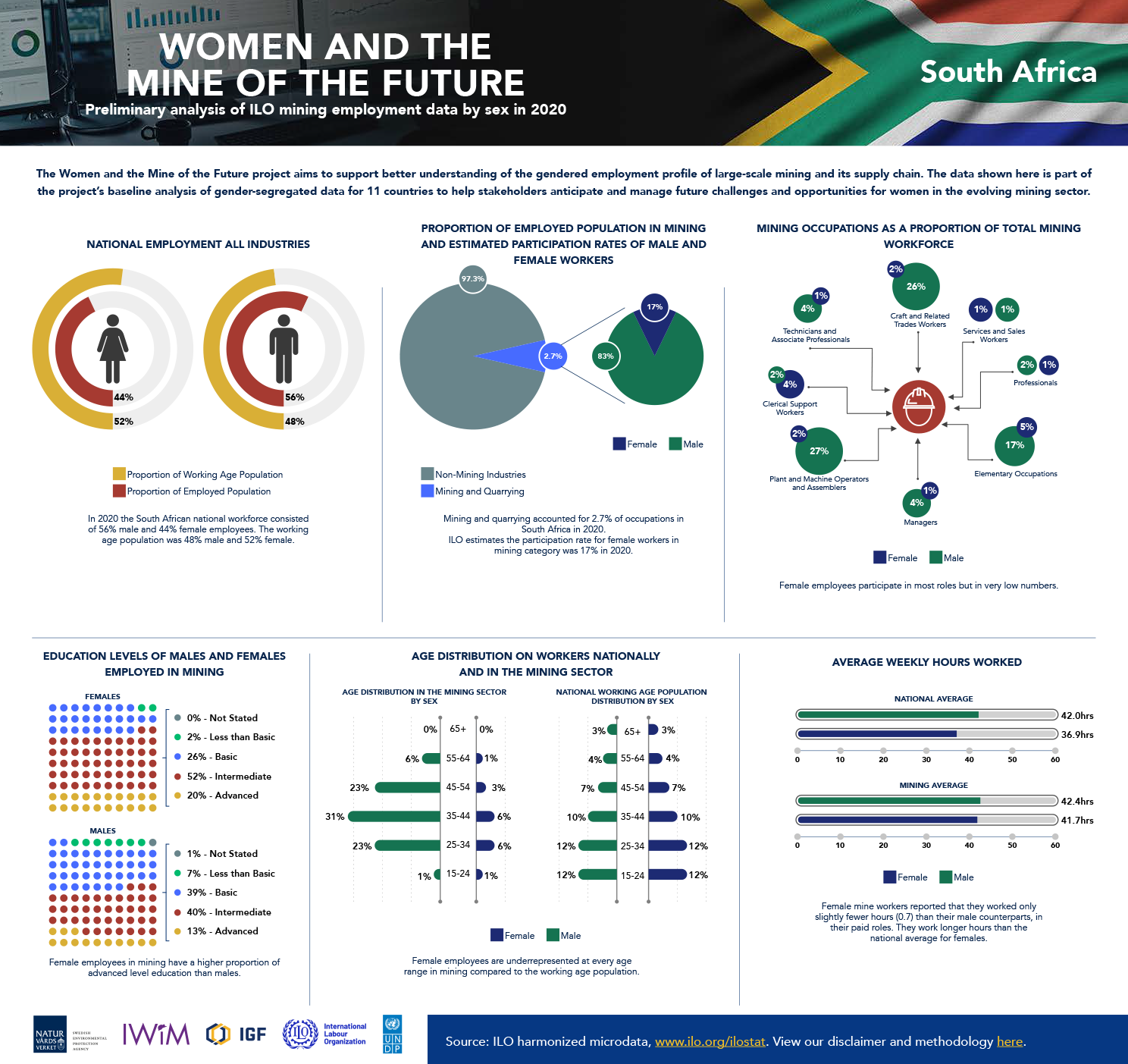 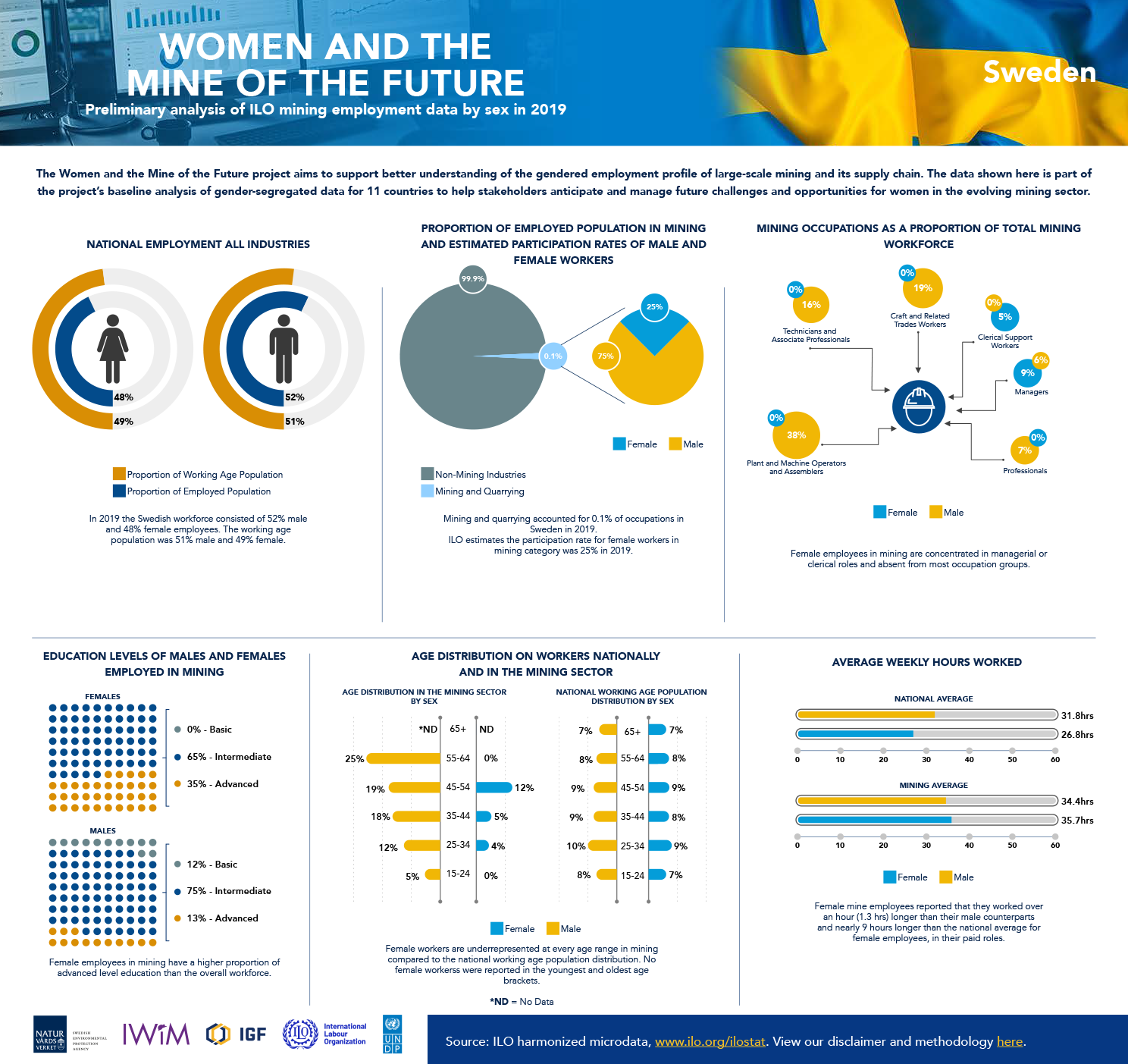 Digging Into the Data

Data from Chile suggests that the real median income for mining is triple that of workers in the broader economy. However, fewer than 10% of total employees in the Chilean mining sector are women. In Peru, we see that women represent only 5% of the core mining jobs and 10% of all mining jobs. Sweden is an exception where female workers represent a quarter of the total mining workforce—notwithstanding the fact that the mining sector employs only 0.2% of workers in the country.

Even though women often make up a small fraction of the total mining workforce, the data shows there are some roles where they clearly dominate: clerical and administrative occupations. In Sweden, 73% of clerical support workers are women; in South Africa, 52%. Data from Canada shows that women are under-represented in almost all occupations, except human resources and financial roles—positions that are particularly at risk of becoming obsolete as new technologies are adopted.

On the positive side, women are more likely to be qualified in the fields of natural and physical sciences such as geology, environmental engineering, and natural conservation. As investors, operators, and other stakeholders increasingly prioritize sustainability, staff with these qualifications will be in high demand. Some indicators are already hinting at this trend, such as data from Brazil, where we see female dominance and even a reverse gender pay gap that favours similarly qualified female workers in agriculture, forestry, hunting, and fisheries.

One of the most surprising findings from our preliminary data is that women have a much higher level of education compared to the men they work with. In Mongolia, around 42% of women in mining have a bachelor’s degree or higher, compared to 29% of men. In Brazil, 56% of women have advanced education, while almost 99% have attained education above the basic level. Women in the Canadian mining sector similarly have higher levels of education, resulting in lower unemployment rates than women in other industries.

We also see that women are significantly under-represented in programs that train technicians, tradespeople, machine operators, and drivers. This signals a need to support female workers to acquire the skills required to fill these roles that have a low barrier to entry and are evolving to adapt to new mining technologies.

And while women may have higher-level educational attainment, our research shows that it tends not to be in the STEM fields of science, technology, engineering and math: the fields most related to the more secure, high-paying jobs in mining.  In Australia, the roles where women represent more than 20% of the mining workforce are those that require non-STEM qualifications. In Canada, women constitute 34% of the mining employees with non-STEM degrees whereas this ratio is 11% for all industries. Interestingly, Canadian women with STEM degrees prefer other sectors over mining as they have higher representation in other industries. Similarly, in South Africa, the percentage of women graduating with STEM degrees exceeds their representation in the mining workforce. These trends show that while increasing women’s mining-related education is important, it may only be a partial solution unless other entrenched gender inequalities in mining, including the gender pay gap, are not properly addressed.

Forecasting the potential gendered implications of new mining technologies is no easy task. But it’s safe to assume we can’t expect the technology alone to bring equity to the mining sector. It will take good policy based on sound evidence.

The preliminary data from Women and the Mine of the Future offers insights that must be considered by governments, industry, and other stakeholders in large-scale mining. The next phases of our project will use the data to assess how these technology-driven trends will affect women in mining and related supply chains and outline key barriers to increased participation by women in mining. Finally, we will publish guidance and implementation resources to inform decision-makers in a position to make policy and impact the mining industry.

Ege Tekinbas is Senior Policy Advisor, Gender Equity with the Intergovernmental Forum on Mining, Minerals, Metals, and Sustainable Development (IGF). Women and the Mine of the Future is a collaborative project to increase understanding of the status quo for women in mining, so stakeholders can anticipate, assess, and address gendered impacts as mining evolves. The project partners are the IGF, International Labour Organization (ILO), International Women in Mining (IWiM) and the Environmental Governance Program of the United Nations Development Programme (UNDP) and the Swedish Environmental Protection Agency (SEPA).