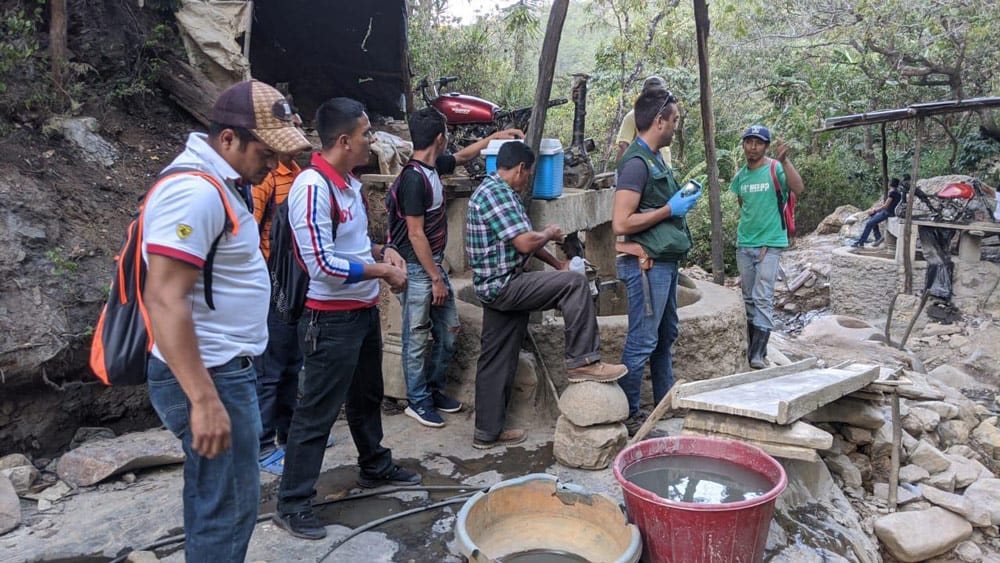 Situated in the middle of Central America, Honduras is home to more than 9.3 million people. Mining has taken place in the country since the colonial era and forms a relatively small part of its economy today. Nonetheless, the sector continues to employ thousands of people in Honduras, where unemployment is a major concern, and more than half of the population lives in poverty.

Thousands of men and women earn their livelihoods in artisanal and small-scale mining (ASM) operations in Honduras’ mineral-rich hills, often close to agricultural plantations. The ASM sector employs a mostly unskilled workforce, relying on rudimentary tools and techniques. As such, hazardous environmental, health, and safety practices are common, and miners regularly suffer accidents in underground mines and illnesses from exposing themselves, their families, and their communities to toxic materials related to mining activities.

Agua Fría is one such mining community, nestled in the mountains of eastern Honduras, 1,070 metres above sea level and located between pine forests and coffee plantations. Mining has been a part of the community since the 16th century. Today, Agua Fría’s informal miners work in groups of 10 to 12, extracting ore from tunnels and pulverizing it with “arrastras,” rudimentary traditional Chilean mills, using mercury to extract the gold from the crushed rock. This is followed by the panning process, typically done by women, and ends with the burning stage, where a miner will use a blowtorch to evaporate the mercury and recover the gold. The entire process is done with little to no personal protective equipment.

For the government, formalizing mining operations in places such as Agua Fría was necessary to improve the sector’s social, environmental, and economic performance. While good information about the ASM sector was lacking, authorities knew of thousands of such operations, as it regularly responded to the tragic accidents in ASM sites throughout the country.

“We were improvising response actions as quickly and effectively as possible, but we understood that we desperately needed a better strategy to prevent bad practices as well as to promote the good ones,” explained David Alcantara, Head of the ASM Unit for Honduras’ mining authority (INHGEOMIN, in Spanish). “There was little publicly available information on ASM governance practices in other countries.”

In collaboration with its member countries, the IGF developed a Guidance for Governments: Managing Artisanal and Small-Scale Mining that outlines a step-by-step process for governments to follow to develop, implement, and monitor an effective ASM management strategy. In June 2018, Honduran officials were invited by the IGF and United Nations Development Programme (UNDP) to a week-long regional workshop on managing ASM in Latin America. In total, 27 participants from nine Latin American countries came together in the Dominican Republic to develop effective management strategies for their ASM sectors based on IGF’s guidance.

Honduras sent four officials to the training ready to absorb as much knowledge as possible from the IGF and other countries, such as Colombia and Peru, that have large ASM sectors. “We arrived at the workshop with a draft ASM regulation as part of our strategy at the time. We were eager to finish that week with a robust strategy, including the new ASM regulation that reflected international best practices,” said INHGEOMIN official Sergio Montoya.

ASM Workshop and Field Visit in the Dominican Republic

During the training, the Honduran officials created a draft ASM management strategy and received valuable feedback from other country participants. By the end of the week, they were keen to implement the strategy.

Just four months after the workshop, a new ASM unit was born in Honduras. In 2019, authorities launched an ASM task force. It developed a management strategy and action plan initially focused on priority regions, including Agua Fría, before expanding its scope. Within 10 months, Honduras enacted a new ASM regulation. All of these policy developments flowed directly from the capacities built through the IGF workshop and guidance.

On the ground at Agua Fría, officials began by meeting with community members, followed by a diagnostic visit that included an environmental assessment revealing severe environmental damage in the community, including arsenic in water sources coming from a historic mine site. Officials built capacity with Agua Fría’s ASM miners to start the formalization process. As of 2021, 142 miners have joined the legal mining organization in the community, receiving occupational training and complying with health, safety, and environmental standards and regulations, including periodic audits by the mining authority.

We consider these efforts only the beginning. With this experience, we are able now to improve many more ASM operations and lives in rural communities.

Agua Fría is just one example of the informal operations where Honduras is using its ASM strategy. As of 2021, the government authorized 65 mining areas for formalized activities that host 20 artisanal and 45 small-scale operations. The 1,000 miners working at these ASM sites have been successfully transferred into the formal economy with its associated training, regulations, standards, and audits.

Honduras’ strategy also recognizes that collaboration amongst stakeholders is key to the continued improvement of ASM practices. Reflecting the IGF’s recommendations, officials have been pursuing external partnerships with programs such as Planet Gold and the Alliance for Responsible Mining to further advance environmental, social, and economic improvements.

The collaboration between the IGF and Honduras is affecting the lives of many ASM miners in the country. Moving dangerous, unregulated mining operations into the formal economy is improving health and safety practices, economic opportunities, and environmental performance for the miners and affected communities.

“Mining is a dignified activity. It generates employment, and with formalization we will be able to reduce its risks and generate better rural economies,” said Alcantara. “We consider these efforts only the beginning. With this experience, we are able now to improve many more ASM operations and lives in rural communities.”