Tax treaties generally allocate taxing rights between the governments that are parties to the treaty, in particular between their place of operation (source country), headquarters (residence country), and any intermediary jurisdiction (investment hub) that may be involved in the business of the company.

Treaties can have a major impact on which government is entitled to collect taxes—and how much. This can affect the allocation of hundreds of millions of dollars for mining countries or for other countries related to the investor.

While governments might negotiate tax treaties to attract foreign direct investment, in some cases companies can improperly use tax treaties to facilitate tax avoidance. Tax treaties offer a range of tax advantages including the reduction of withholding taxes (on dividends, interest, and royalties) and a foreign tax credit or exemption to eliminate double taxation. As such, tax treaties can be viewed as tax incentives that can be exploited by tax planners.

There have been many instances of tax treaty abuse in the extractives sector where companies used tax treaties to reduce their tax payments to governments of resource-rich developing countries. Some examples include Heritage Oil and Gas (Britain) in Uganda, Paladin Energy (Australia) in Malawi, and a Canadian subsidiary of Rio Tinto, Turquoise Hill Resources, in Mongolia. 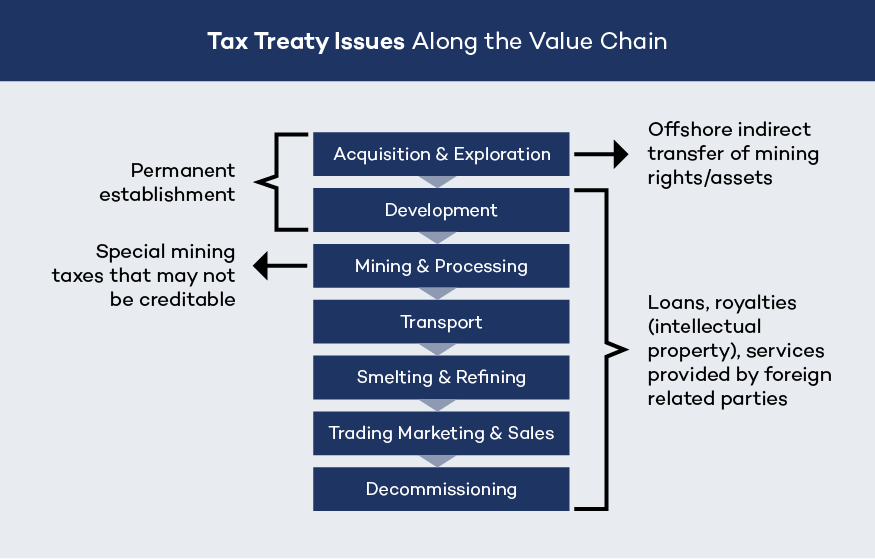 In August 2021, we released a draft for consultation on our forthcoming practice note entitled Protecting the Right to Tax Mining Income: Tax Treaty Practice in Mining Countries. Learn more about practice note and consultation here.

We have also initiated new empirical research with the International Senior Lawyers Project on tax treaty practice in the mining sector. Our work will examine the potential impact of tax treaties on government revenues from mining, identify the treaty articles that are most relevant to the sector, and highlight the best resource-relevant treaty practices.

And we have developed a comprehensive training program on international tax treaties and the mining sector. The training covers issues such as permanent establishment, immovable property, and capital gains tax.

More about our capacity building work

Webinar: The Cost of Tax Competition in Mining

“The BEPS in Mining training deepened my knowledge of international taxation and treaties... which is important and useful for my work.”

Any cookies that may not be particularly necessary for the website to function and is used specifically to collect user personal data via analytics, ads, other embedded contents are termed as non-necessary cookies. It is mandatory to procure user consent prior to running these cookies on your website.